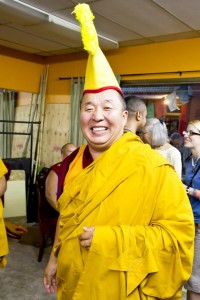 Geshe Damchoe was born in 1968 in Mongolia and has been a Buddhist monk since 1991 when he was ordained by Bakula Rinpoche.  He received his Gelong ordination in 1995 by His Holiness, the XIV Dalai Lama and studied at Sera Jey Monastery in Southern India for 19 years.  Venerable Damchoe completed his Geshe Degree in 2012, the first Mongolian to receive a Geshe Degree from Sera Jey Monastery in Southern India. During his time in India he also attended many of the public teachings given by the Dalai Lama on a variety of subjects in both Dharamsala and India. He has been a full-time resident teacher at Lion’s Roar Dharma Center in Sacramento, California since 2008.